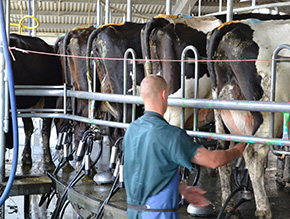 Our focus on udder health started as a research project investigating the impact of nutritional inputs on clinical and subclinical mastitis.  This involved trace elements, vitamins, plant extracts, essential oils, hyper-immune whey.  We showed we could reduce SCC, lift the cows own immune response to start-up infections (self-cure rate), and saw a noticeable improvement in the success of antibiotic treatment. The understandings gained are progressively being included in our range of udder health products.

The physical impact of milking was pivotally important; if milking was creating teat end trauma (and indirectly increasing the risk of pathogen challenge) then nutritional inputs were less able to produce a noticeable improvement.

By chance (actually waiting in line for a flight that had been cancelled) we came upon SurePulse inserts and triangular liners.  This technology is a game-changer.  The breakthrough is that when teat end damage is a thing of the past, plant vacuum level can be optimised (often re-instated) which then generally means faster and more complete milk outs.  This combined with the action of the triangular liner points to greater keratin & pathogen removal during milkings.

LIC completed a research study on the cost of mastitis.  It involved 166,000 cows and several million records.  At the then $4/kgMS, LIC reported that if the average BSCC dropped by 60,000, suppliers would be on average $20/cow/yr better off, and that the cost of mastitis for the average supplier was $36.50/cow/yr.  This supports earlier estimates of $12-14 of lost production per cow for every 50,000 bulk SCC above 50,000.  This is owing to damage and loss of productive secretory tissue from subclinical and clinical infections that are not dealt with by the cow in the first instance, and from insufficient nutritional support of secretory cells.

MCM CALVING™
MCM CALVING is a combination of trace elements formulated for their contribution to, and impact on the birth process, vigour and appetite of both cow and new-born calf, immune response, and calcium metabolism.  In addition to preventing the immune system overwhelm associated with problem calving that typically results in mastitis, one of the observations arising from the use of MCM CALVING is an improved response to antibiotic treatment for mastitis.  MCM CALVING is used starting prior to calving and continuing through early lactation.  It is available in soluble powder, feed-out wagon premix, and liquid formats and can be added to concentrate mineral pellets.

LEADING EDGE VITAMINS™
Transition period vitamins, designed to support immuno-competency, especially in respect of retained membranes and mastitis infections, and to enhance colostrum quality.  Added to feed or via trough dispenser for springer/ calvers, it can also be given to freshly calved cows and included in concentrate mineral pellets.

The insert works in two ways;Combined this means more time resting for the same length of time in the milking phase.  This allows the end of the teat to “recover” better between sucks!  It also means that the end of the teat does not experience the trauma of over-opening (due to over extending of the liner with age) or blood capillary damage and sphincter inversion (due to over suction of the teat end).
Triangular liners are resistant to barrel splitting because the pre-formed corners move less during each pulsation cycle.  The physical action during closing and opening differs from round and square liners and suction is not interrupted to the same extent.  This gives a totally different feel on the teat (as evidenced by finger test) – some liken it to massage compared to being tugged at.